You are here: Home / You Know? / What The Hunger Games Trilogy Knows About the Pro-Life Movement
Have you seen The Hunger Games movie? Better yet, have you read the trilogy? If you’ve been putting them off or looking for a reason to enjoy Suzanne Collins’s explosive series, here is another reason to add these books to your short-list.
After reading The Hunger Games and seeing the ensuing movie, I couldn’t help seeing a Pro-Life agenda hidden in its pages and scenes. Let me show you: 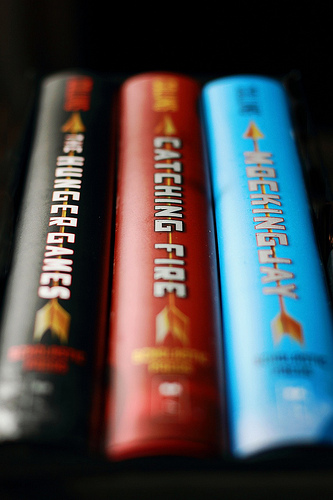 Photo Credit: WeeLittlePiggy via Flickr
“It sends out a very clear message: ‘Mess with us and we’ll do something worse than kill you. We’ll kill your children.’” The Hunger Games
It’s easy to be disgusted by The Capitol’s attitude toward keeping a stable society. Each year, 24 children are forced to fight to the death in a televised bloodbath leaving one lonely victor to tell the tale. But, what people in our society often overlook is the fact that thousands of our own children are being slaughtered each day in the name of status quo – keeping a pregnant woman’s childless life intact. Maybe it’s time readers ask themselves why the Hunger Games is so stomach turning, yet the idea of abortion is run-of-the-mill. Are they not both government sanctioned genocides?
“Destroying things is much easier than making them.” The Hunger Games
Isn’t that the truth? How much easier is it for a mother to kill her unwanted child than to birth him? And let’s not forget diapers, night feedings, clothing, discipline, college tuition and so forth. Yes, life would be easier without a kid, but does that justify destroying it? And, let’s not forget…
“But I don’t know what to tell him about the aftermath of killing a person. About how they never leave you.” Mockingjay
Abortion is often considered justified by many in the cases of rape, incest or disease. Let’s not downplay the horrific affects that these events can have on the human body, mind and soul. But, at the same time, does the victim of one of these instances deserve more pain than she has already endured? Does she not realize the scars that an abortion will leave on the heart and the soul? Will that person be able to face their child in the afterlife and say, “I killed you because I was hurt myself”?
“But collective thinking is usually short-lived. We’re fickle, stupid beings with poor memories and a great gift for self-destruction.” Mockingjay
Abortion is often associated with the liberal-minded. It is a cause they fight for in the name of human rights. It is popular. It is in-style. It is the norm. But, could it be that this liberal thinking is simply a fad? I can only hope. I hope that one day we realize the destruction we are causing in our world and beyond, and perhaps more importantly, remember the error of our ways lest history repeat itself.
“Only I keep wishing I could think of a way…to show The Capitol they don’t own me. That I’m more than a piece in their games.” The Hunger Games
Finally, think about the life that ends when an abortion takes place. If we want to fight for human rights, let’s start with the most helpless of humans. Let’s start with the unborn. And, instead of using babies as kindling in the political fire, let’s find ways to enlighten the minds of those in darkness without engaging in mindless babble and arguments. Pray for those on the other side. Listen to their thoughts, and gently guide them to the truth. And, “May the odds be ever in your favor!”
Disclaimer: Suzanne Collins and The Hunger Games Trilogy are not affiliated with this post in any way. All opinions expressed are my own.
*
*
*
You have just read a post by Call Her Happy. Consider leaving a comment…I love ’em!

« 30 Days of Prayer
The Homeschool Experiment »