You are here: Home / You Know? / What living in an old house has taught me about privilege. 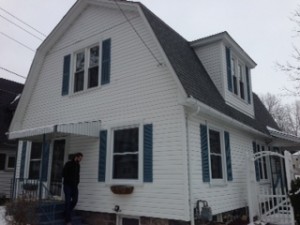 Our house was built in 1920. In that year, Robert and Mary were the most popular names. The Harlem Renaissance began and so did prohibition. Women were granted the right to vote. And, if you lived during that time, you might have been a flapper.

What a cool time for our house to be born.

And because our house was built in this year, things were manufactured a bit differently. Today, houses have tons of storage, finished basements, room for pools, high-tech features and every convenience you can dream up. My house doesn’t have those things. And while I would never rule out moving to a newer home one day, I like my house just like it is. It has taught me many things about what we take for granted today.

I don’t know what kinds of updates were made to our home since 1920, but I am going to assume that these three bedrooms have always been here. In 2013, these three bedrooms are considered tiny for even one person. But, Mike and I plan on having more kids and shacking them up together, much like it would have been done in 1920.

It seems in 1920, they weren’t hesitant to put kids into rooms together. It creates a friendship among siblings. While it is always nice to have plenty of space for yourself, I am ok with the fact that for a while, my kids will learn to live in tight quarters together. They will learn to get along. 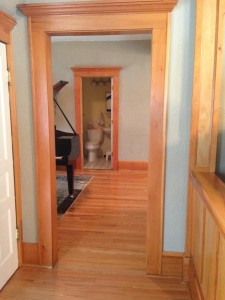 Honesty: All of these pics are from before we moved in. We don’t have a cool piano like that…

Everything is ample nowadays: hallways, parking spaces, shopping carts, airline seats. But our hallways in our house are mighty narrow. Perhaps it is because people were smaller in 1920. And perhaps they were smaller because they didn’t eat hormone-laden food in mass quantities. I’m pointing that finger at myself too. 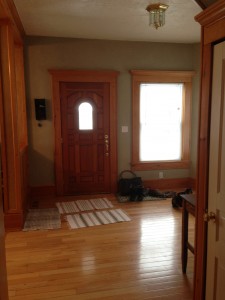 When you walk into our home, you will notice a very large welcoming area. There is plenty of space to greet guests, share hugs and linger over conversation despite the fact that company planned to leave long ago. Were the 1920s a time when neighbors gathered together and shared experiences and conversation? I think so. You just don’t get that as much anymore. My introverted self likes that. My nostalgic self does not.

We don’t even have a linen closet upstairs. You know what that tells me? People didn’t need lots of storage then. They had what they needed and only what they would use. With lots of storage, there is no incentive to purge your home of unneeded things. We can pack it all in and hoard it “just in case” we need it someday.

Our basement is unfinished; I can barely stand up in it, and I can’t even stand at all in many points. Mike can’t stand up in our basement at any point. The basement wasn’t created to be an area where we put an extra TV and gaming system. It wasn’t supposed to be another place to store all of the kids’ “big toys.” It was a place where they kept the cistern (yup, we have one) for collecting rain water that would be used to do many household tasks. Did you really think rain barrels were something new?

What our house has taught me:

We live in a time where it is all about convenience, excess and privilege (And, I’m grateful. I really am.), but we shouldn’t forget that there used to be a time where things had to be worked for, and things weren’t always easy. I guess what I’m trying to say is it’s ok to do a little work in your life and not always make your life do the work for you. <Tweet This>