You are here: Home / You Know? / Waterworks 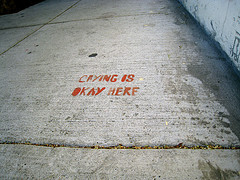 Photo Credit
Ok. So yesterday I mentioned that we spent Memorial Day at the splash pad. What I didn’t mention was the awkward situation we didn’t deal with.
While splashing, a family arrived to join in on the fun. Or so we thought. A husband and wife brought their three kids to the park and took them over to the water area where we were playing along with other children and their families.
The older two children jumped in and had a great time. The youngest child (I’m thinking he wasn’t older than 2) was terrified of the water. Instead of comforting him or even just ignoring his behavior, the mother insisted on screaming at him, “It’s just water. Get over it!” repeatedly. She kept looking at all of the other parents like, “Am I right?” And she was met with lots of people who were suddenly extremely interested in their feet – including me. Then, her and her friends would fill up buckets of water and dump it on him and place him on top of the water spouts while he was crying. It was so uncomfortable that almost every other parent and child in that water area left.
I’m actually tearing up a little writing this. It was that horrible. All I could do was just stare at the little boy. My mama bear instinct wanted me to grab him and hug him. I didn’t know what to do. I mean, she wasn’t doing anything that she could really get in trouble for. She was just being a downright awful parent.
I don’t use those words lightly. After becoming a mom, I have learned to keep my judgments in check. But seriously, she was a bad mom. It has to be said.

I keep thinking I should have done something, but what would I have done? What would you have done? Clearly I am not past this. Maybe you can help me sort it out.

« Can You See My Bathing Suit?
Another Weird Obsession »