You are here: Home / Link Up / What I Wore Sunday / Mantilla Link Up 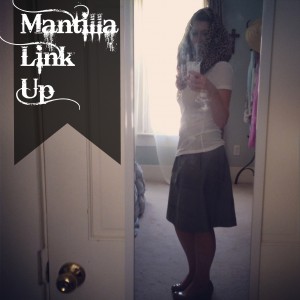 I opened the link up early so you could put your thoughts up now if ya wanna.

Did you do it? Did you try a mantilla at Mass? What did you think? Let’s talk about me first. Wink.

So, here are some pics of my outfit today, complete with veil. 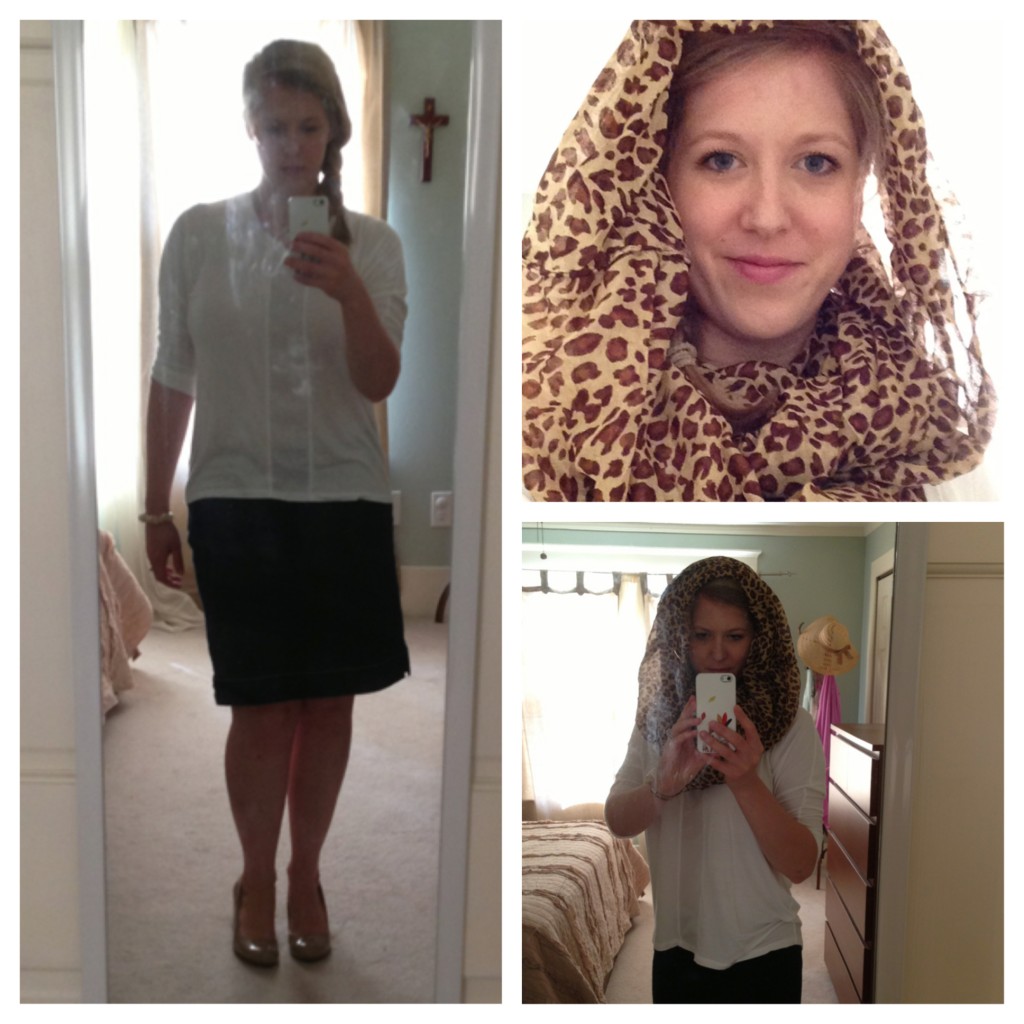 Might I possibly be the only person who veils in leopard print?

Logistically, the infinity scarf was perfect. It never fell off during Mass, Ellen and Sam never bothered it for some reason, and it was really easy to slip on and off. I walked into the church wearing the scarf as normal, slipped it over my head for the duration of Mass, and when it was over, I pulled it back down like a normal scarf.

Physically, I will say that it made me a little warmer than usual. But, I mean, I had something on top of my head, so… Also, I did find it to be a good physical reminder that I was at Mass. I found myself paying better attention than I normally do.

But, veiling myself did nothing to better the behavior of my children, and by children I mean Ellen. She was a real bearcat today. So, I payed as much attention as I could, but I was still required to wrestle a toddler and give sidelong glances. Ellen looked at me after Mass and said, “Can I have a donut now?” I actually snorted.

Getting ready for Mass was another interesting aspect to this experiment. A veil is supposed to symbolize modesty (among other things), and it is supposed to guard you from vanity. But, I found myself spending more time on my outfit and planning more than I normally do so that everything would go with the veil. I think that kind of defeated its purpose.

As far as feeling self conscience or awkward, I didn’t. I just don’t get embarrassed super easily. I nurse in public without a cover, so veiling was no bigger of a deal than that. And, I didn’t feel like I got any weird looks, or maybe I just don’t notice stuff like that.

Mike said he noticed that I was veiling, but it didn’t strike him one way or the other. “If it is something that helps you at mass, that’s totally cool.” I asked him if he had other thoughts, and he said, “Not really. Is that good for you?”

Will I Continue to Veil?

I felt more present at Mass than usual, but the fact that I still had to deal with a toddler meant that I wasn’t completely focused anyway. I didn’t feel unwelcome by others, so that would not be a factor for me. I did notice that getting dressed became more tedious. I love clothes and fashion, so I don’t really need another reason to spend time on this.

Bottom Line: I am really glad I tried this out because it has been on my heart for a while, but I don’t think it will be a regular part of my church routine.

Tell me what you thought. Link it up. (Check here if you need the details of the link up.) Visit some other veilers and show the love. I will leave it open until the end of the day on 9.17. Good? Good.

And, don’t forget to show some love to FLAP.

« 7QT: Picture Light
Let me just get up on my NatureBox… »