You are here: Home / Guest Posts / Finally! Finger Food Fiesta!
Hey Everyone! I have an awesome guest post for you today. It is super timely for where I am at in my parenting life right now. Jen was a huge help to me when figuring out how to feed Ellen finger foods without having a panic attack. She has been generous enough to share her knowledge with all of you as well! One last note, if you are a blog reader like me, and you enjoy Call Her Happy, subscribe to Jen’s blog. It’s a great read!

Hello, internet friends! I’m Jen from A Ginger’s Guide to Parenting and Design (gingerguide.com), and I’m so happy to be guest blogging here at Call Her Happy. A little bit of info about me: I’m married to my graphic designer husband Mac and am the proud mama to a 16 month old whirlwind named Sullivan. I blog about parenting and modern design with some randomness thrown in so come on over and visit sometime!

Starting finger foods with my kiddo was an exciting and terrifying time. Oh and frustrating. Did I mention frustrating? You’ll need the patience of a saint at this point in your parenting career. My greatest fear, as I’m sure it is with any other mom, was choking. I was sure he was going to choke. I am CPR certified but I’d be lying if I said I didn’t refresh my skills before letting him start feeding himself. (EVERY parent should be CPR certified! I cannot stress this enough. Classes are easily found and inexpensive.) 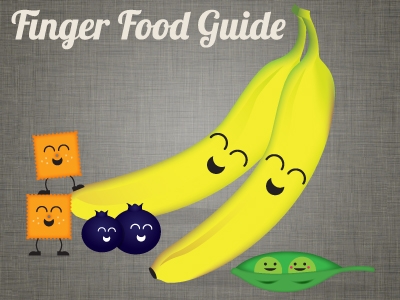 Puffs are always a good starter food. We started with puffs when Sullivan was about nine months old. Before every meal, we’d put some on his tray and let him play around with them. At first he just held them in his hand and smashed them. We would put one in his mouth just to let him get used the texture and to tell him that this, unlike the dog food, is something he CAN eat. The first few times he spit it out but every so often, he’d keep one in there. Give your child five minutes or so to play around with the puffs then move on to the pureed baby food. Consistency is key! Don’t expect them to get it after one try. It takes time; lots of time and patience. And cleaning products, you’ll definitely need those. After weeks and weeks of us showing him the puff and putting it in his mouth, he still had no interest in it. Then, one day he just did it. Out of nowhere, he picked up one right after the other and delicately put them in his mouth while looking at me as if to say “What’s the next course, mother?” Let me tell you, for a while there I was envisioning him going to kindergarten and still having to be spoon fed pureed peaches. They will get it! Just be consistent in offering it.

Where to go next?

Don’t afraid of trying a variety of tastes and textures once they get the whole hand-to-mouth thing down. Anything you can easily squish between your fingers, your little one can chew with his or her gums. Keep the pieces very small at first, about pea size. Some of Sullivan’s favorites were mangoes, blueberries, peas, sweet potatoes with cinnamon, cooked apples, carrots, squash, and avocado. Cinnamon is a great new addition to their food, especially on sweet potatoes and apples. A note about blueberries: while delicious, your child’s diaper might be a bit alarming the next day. You’ll think he ate a smurf or fifty blue crayons and start to freak out. Then you remember the blueberries and hope it doesn’t stain your hand. Sullivan had a texture problem with food. If it was too slimy or squishy, he wouldn’t eat it. He’d either throw it onto the floor or squish it to smithereens. If you have this problem, crush up some puffs and coat the pieces of food in the powder. It helped immensely.

At the beginning, Sullivan was distracted by everything. The tv, the dog, a bird outside. Try to eliminate as much of these as possible otherwise you will be at the table for hours. No cute plates or bowls either.  They’ll just end up on the floor or your lap. I speak from personal experience on this point. I also suggest only put a few pieces of food on the tray, not the entire meal. Once Sullivan got the hang of feeding himself, he would shovel as much in as his chubby little hands could handle. This is where he started choking. Several times I had to do a finger sweep to clear out a huge mass of food from the back of his mouth. It is so important to always pay attention to your kid while they eat.  Don’t be reading Fifty Shades of Grey with a glass of wine while your toddler is eating. You can make the pieces as small and soft as possible, and they’ll still find a way to choke.

Once Sullivan hit a year, he was full steam ahead on finger food and we dropped the baby food. It was then we found the “guarantee food”. That’s the food he’ll eat no matter what. If he’s pissed or not liking the rest of his meal, this is my backup. For us, that food is chicken nuggets. I try not to give them to him often but if he’s refusing to eat anything else, I know he’ll at least get some sort of meal. Often, once I get him going on the nuggets, I sneak in some fruits and veggies on his tray. He just grabs and gobbles them right up. I’m sneakier than my toddler and yes, I’m proud of it.

It was at this time Sullivan learned all about gravity and how fun it was to drop things from the high chair. See how they smash on the ground? Fascinating. At first, we knew he wasn’t doing it on purpose. He was just learning…very messily. We told him “We eat food, we don’t throw food” then take a bite ourselves. Usually he did the same. Soon we noticed he was doing it on purpose. After he’d drop the food, he’d look up at me and I could tell. We warn him once with “We eat food, we don’t throw food”. The second time he does it, we pull his tray off and set it on the table. This normally causes a huge tantrum once he realizes the food is gone. After thirty seconds or so, we give the tray back while again saying “We eat food, we don’t throw food”. Rarely, very rarely, he does it a third time. At that point, we pull him fully out of his high chair and set him on the floor saying “All done!”. We give him a few minutes then put him back in the chair if he’s still reaching for the food. Repeat as needed.

Finger foods can really help introduce the rest of the family to healthy eating, I know it has in my house. We have much more fruits and veggies in the fridge now than before. I’m also meal planning and couponing like crazy. Saving money is always a bonus. There are so many websites and books available that have tons of ideas for toddler meals so you don’t keep going back to the same meals. Keep up the variety and consistency and, most importantly, don’t give up! Your kid will not be eating pureed PB&J in kindergarten, I promise.

I hope this gives you some good ideas about getting started and where to go from there. If you have any questions, leave a comment and I’ll do my best to help out. Come visit me over at A Ginger’s Guide to Parenting & Design (gingerguide.com) and thanks to Jenna for having me visit today.

This post is participating in the Mommy Monday Link Up!