Since we got married two years ago, my husband and I have been parishioners at Our Lady of Sorrows parish in South Orange, New Jersey. We’re really lucky to have such a lovely church within walking distance. I grew up in northern Virginia, where most of the parishes look like 1980s Pizza Huts, so I’m always excited to find more traditional church styles. This parish is packed with beautiful symbolic details inside and out. 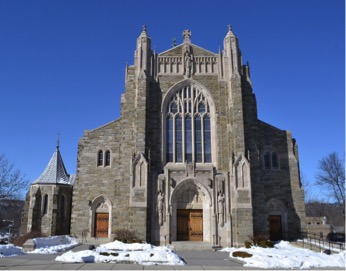 The church was built in 1931, designed in the French Gothic style by Boston architects McGinnis and Walsh. The copper steeple is visible from far away, and is similar to the one on the nearby Newark cathedral. 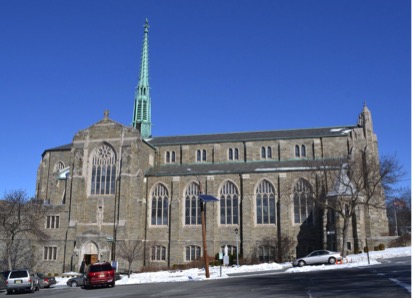 The exterior doorways feature images of Mary’s presence at her Son’s death. I especially like how the iron hinges on the doors are in a heavy medieval style. As with many older churches, the narthex here isn’t very big. On the left side is a room that was originally a baptistery, but is now used for vestment storage. The doorway carving here depicts Christ’s baptism in the Jordan. 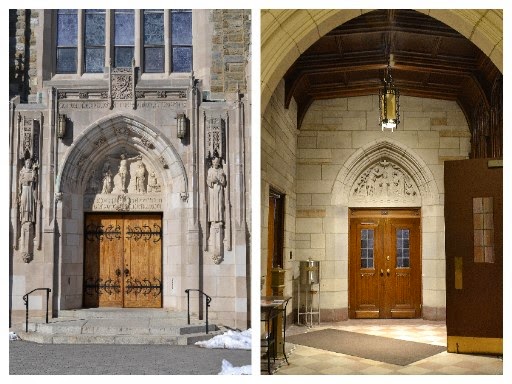 There are many delicately carved wood elements throughout the church, like this screen separating the narthex from the nave. 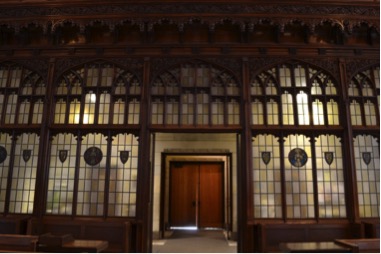 Inside the nave, there are two votive shrines to the Sacred Heart and St. Therese. The octagonal baptismal font sits in the middle of the rows of pews; the eight sides symbolize Jesus’ resurrection as the 8th day of creation. 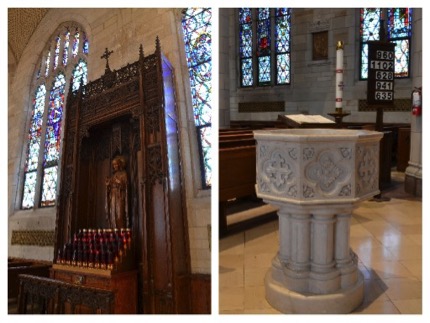 The nave is full of columns, pointed arches, and vaulted ceilings. 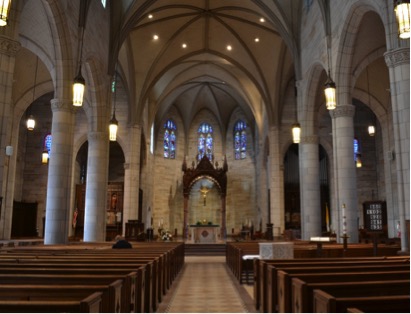 The ceiling appeals to my architectural history nerd tendencies because of its zigzag tilework. This resembles the work of Rafael Guastavino, who designed vaulted ceilings for many famous spaces in New York City, like the Cathedral of St. John the Divine and the oyster bar at Grand Central Terminal. 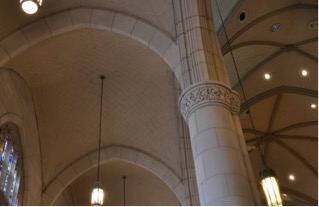 Renovation work was done on the church in the 1980s, but fortunately not too many traditional features were removed. You can tell that the current altar replaced the marble one further back where priests used to say Mass ad orientem, but it matches the building’s overall look nicely. 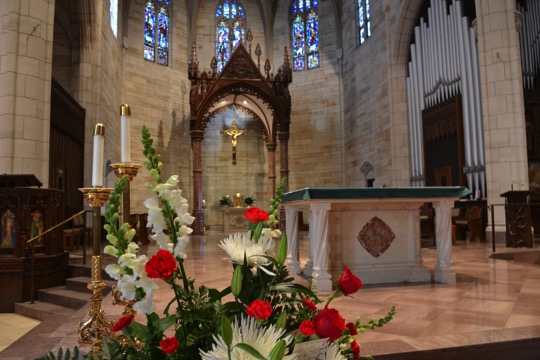 The oak pieces in the sanctuary are some of my favorite parts of the whole church. The pulpit features carvings of the twelve Apostles plus painted portraits of some Doctors of the Church: St. Robert Bellarmine, St. Ambrose, Pope St. Gregory the Great, St. Augustine, and St. Jerome. 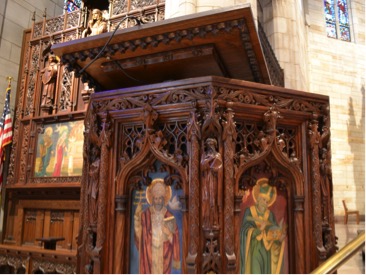 I also love getting a close look at the baldachin, or altar canopy, when Iím sitting in the sanctuary as a lector. The center medallion depicts the Trinity with Jesus as the Lamb of God. St. Peter and St. Paul sit on the corners, and the angels across the top look like they’re going to zoom up into the heavens. 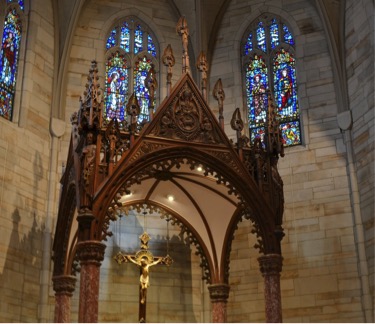 So many different saints appear in the stained glass windows, from Mary Magdalene to Thomas Aquinas to Joan of Arc. Since he went to a Jesuit high school, my husbandís favorite is the one in the left transept depicting the North American martyr missionaries.

Weíre both fans of the unique artwork around the church. The Marian shrine has a painting of Mary being presented in the Temple along with the usual statues. I’ve never seen brass Stations of the Cross like this before. Did you know that all church Stations must have a small wooden cross attached? It’s a symbolic connection to pilgrimages in the Holy Land.

Thanks for visiting along with me. Stop by if you’re ever in north Jersey; our choirs sing beautifully! 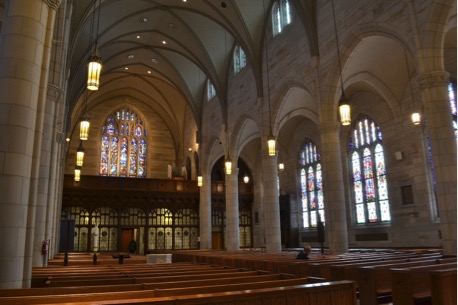 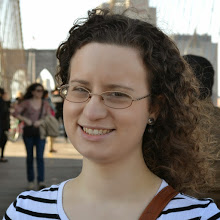