You are here: Home / Holiday, Celebrate / Our Lurve Story

We’re celebrating three years today which, I think, makes us experts on marriage or something like that. We might know a thing or two, maybe.

We are going to make pasta out of the box and rent a movie from iTunes tonight after the charges are in bed. We don’t do anniversary gifts for various reasons I can elaborate on later (if you say please), and that’s probably a good thing because the traditional gift this year is leather. Go where you will with that… 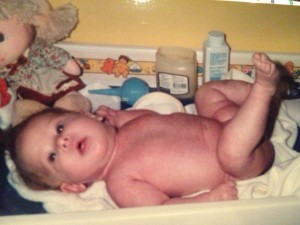 She remembered walking across the stage of her graduation ceremony thinking, “Hm. I really thought I would meet my husband in college.” She hadn’t and life was moving on. So Jenna continued living up at school until the lease was up on her house, and student teaching was going to start in the Fall.

very rare photo of very brief stint as a teacher

Mike was living in Indiana doing a co-op with Toyota (Sienna, what!!), and he was going back to school for the Summer semester. If you’re wondering if he is younger than Jenna, the answer is yes. Rawr. He was looking for a room to rent, so he put a message out on Facebook looking for a lead. An acquaintance Mike went to high school with messaged him that they had an open room, and Mike took the spot.

Meanwhile, Jenna was working as a waitress at a family restaurant, drinking a leetle too much, and making poor decisions with her life. She was not following God’s plan for her soul – if you want to put it lightly.

One Summer night, Jenna’s friend David invited her to a housewarming party he was having. He wanted to show off his new house and introduce his new roommate to his friends. Do you see where this is going? 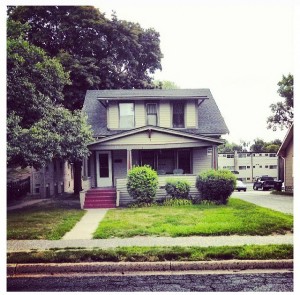 Thanks for the pic, David!

Jenna had a softball game that night, but showed up later – sweaty and a little dusty from a great slide into second base. She was safe. They lost.

When David’s new roommate came into the room, things became very cliche and predictable. Mike and Jenna locked eyes, shook hands, thought lovely things about one another, and the rest was history. Except it’s not history. I am going to keep going with this.

If they had it their way, Jenna and Mike would have started dating right away. But, one of Mike’s roommates had a thing for Jenna, and Mike didn’t want to step on his new friend’s toes. So, the pair spent every waking moment together as friends: sitting on the porch swing of Mike’s house (that came to be known as “Summer House”), listening to Girl Talk, drinking Bud Select, playing disc golf (boy did Jenna want to impress him), killing it at Rock Band, watching bad movies, and throwing watermelons off of rooftops.

It was no secret that the two were in love, and Mike’s roommate was no dummy. He pulled Mike aside one night and told him to ask me out, and now the rest was history. Just kidding. Still going. 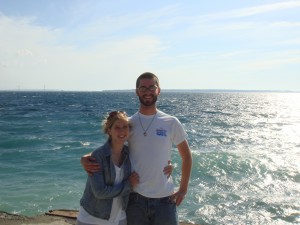 early in out tourist career

They knew they wanted to get married three months after dating. They brought each other closer to God, and it shaped who they are today. Jenna loved the way he made her laugh. Mike loved that he converted her into a Republican. And, Jenna may have cried like a big, fat baby once or twice because she wanted to get married to him. Badly. So sue her. She chalks it up to the fact that Mike took her ring shopping six months after they were dating but didn’t propose until a year later. Rookie move.

When Mike did propose, he did so on the most romantic of all holidays.

The two had the day off work, so Mike took Jenna to Mass and then to a massage and manicure. You see, he remembered that Jenna wanted her nails done after she got engaged because people would be looking at her hands. Vain? Yup. Smart? Also yup.

Jenna had a feeling that he would propose that day, if not soon. She even warned him that manicures don’t last longer than a week. Later, Mike took her home and brought her up to her room. Don’t worry. They brought each other closer to God, remember? Jenna noticed that her room was immaculate, and there were post it notes and red roses around the room.

Mike used to love leaving Jenna little notes everywhere, and he bought her flowers often, but never red. He was saving red for a special day. The notes directed Jenna to her jewelry box. When she opened it, there was one more note with a ring: “Will you marry me?” 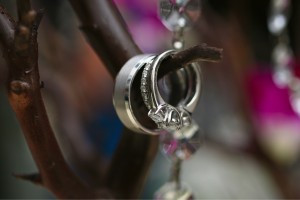 picked fresh from the vine

Mike was down on one knee. Classic. Jenna screamed and said, “Yes!” 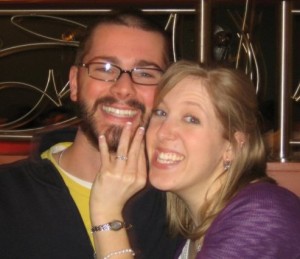 And now, the rest is history. A lovely history.

Finally linking up with Grace and the Lovebirds.