You are here: Home / The Children / It took me two weeks to wrap my mind around this.
Update: When I transferred to WordPress, the pictures did not come too. Fear not, they are on our main computer, but I haven’t been motivated enough to transfer them. Maybe after we have two I’ll have more time…
*** 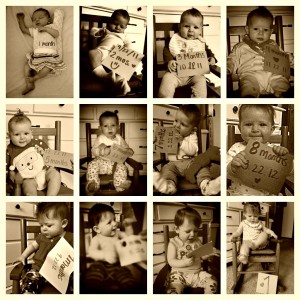 My little squeaky monkey was two weeks and three days old yesterday. It was also Mike’s first day back at work. Selfish. Her and I spent the day trying to figure out what our routine is going to look like. More on that later though…like after I figure it out.

Today, I wanted to talk a little bit about labor and delivery for you birth story junkies. As the title of my post suggests, it took me a while to wrap my head around the whole process, and even as I write this, I am still in disbelief that I did that. I am anxiously awaiting my trophy that I am sure is in the mail.

So, here is our story:

Mike and I were in bed around 10pm the night I went into labor. Earlier that day, I had written my eviction notice, and I assumed that it had not worked. All of a sudden, I heard this loud popping sound that came from my pelvic area. I looked at Mike and said, “Did you hear that? I think my pelvis just cracked!” I wasn’t in any pain, so I didn’t think anything of it until I got up for one of my many nightly bathroom trips. “What is with all of this water?” I thought to myself. Duh, Jenna. I’m assuming you have figured out by now that my water had broke, but being a first time mom, I didn’t get it just then.

I started to feel some cramping at that point, and only then did the idea of labor cross my mind. I texted my doula, Vicki, who confirmed what we thought. She told me I would probably go into active labor within the next day or so. Little did we know what the next 22 hours would hold.

Around midnight, the contractions were coming consistently at three minutes apart. We called the doctor who told us to get in right away as we were supposed to be at the hospital at five minutes apart. Rookies. Mike and I headed to the hospital where Vicki was meeting us. I sat in the back seat hugging the head rest unable to get into a comfortable position which is weird considering how pleasant and relaxed I felt…

This is all sounding familiar to you moms, isn’t it?

I was admitted into labor and delivery where they checked to make sure I was actually in labor. I let them know that if I wasn’t in labor I was, in fact, dying and they should just admit me anyway. Turns out it was labor, but I had not dilated at all.

I was all set for this labor stuff with my detailed birth plan and request for no epidural. 14 hours into labor, I was only one centimeter, and I was having terrible back labor. I opted for the pain meds to get my body to relax enough to dilate, and let me tell you, modern medicine works wonders, and seven hours later, I was ready to push. With the next one, I plan on having Mike give me the epidural before we head to the hospital. Can we do that? OTC epidurals?

Before pushing, I decided to hit my epidural button to get a bit more relief. It didn’t seem to be working, but I just chalked it up to the fact that it was getting time to push, so it must be more intense. After an hour of pushing, I could hear my baby Ellen cry, and then the nurse told me to hold her in. What?! Seriously? She was right there. Like, right there. And I had to hold her for five minutes while Slowsky McDoctor shuffled down the hall?? Finally, I looked at the nurse and said, “I’m not waiting” and Ellen was born! Liability shmiability. When the doctor and other nurses came in, they noticed a big pool of water on the floor next to me. Apparently my epidural had fallen out and I was actually going without one. The placebo effect is very powerful.

Now, most people say they immediately forget the labor process and are just thrilled to see their baby. That’s, like, half correct for me. I was thrilled to see Ellen finally, don’t get me wrong, but I don’t forget those things very easily. We’re hoping it will be a few years until Ellen has someone to call brother or sister. I did however experience an overwhelming sense of love. I had no idea that I was capable of loving anything or anyone as much as I love her. That is the best!

Now this may all sound like a big woe-is-me fest. Let me assure you: it’s not. To be honest, I am so very proud of myself. I discovered how strong I really am. I had no idea I was capable of something like that, and it has given me a new perspective and new confidence. When we left the hospital, I actually mourned the end of the labor and hospital experience. I loved that time (ahem, after it was done) because it created such a special bond between me, my husband and our daughter. I wish I could relive the moment she was born every single day (like, the actual moment she popped out, not the rest). Now, she is growing and changing every day, and all I have of the experience is memories (and a few choice pictures that will remain within the confines of Hines eyes), but I love each day with her at home even more and more. Aw.

« What I’m Doing (And Not Doing) Right Now
You might say I’m a basket case. »