You are here: Home / You Know? / If you’re happy and you know it…avoid this post.

I thought I was killing it Monday: we woke up early (honestly, it wasn’t voluntarily), threw on all of our winter gear, went outside and finally built Ellen a “noman”. I got her ready all by myself, which, if you have kids, you know is an activity in itself. Then, I threw on my snow pants. That’s a lie. I’m, like, 25 weeks pregnant so I shimmied into the stupid pants of flaming heat and didn’t even attempt to budge the zipper. I played it dangerous. 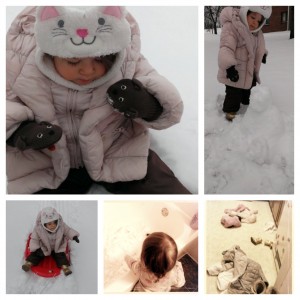 Yeah. I even brought snow in to play with in the tub. Killing it, I tell you.

We played, got inside, did the lunch thing, and then it was time for nap…just like every.single.day.since.the.beginning.of.her.life. I’m not going to detail you with what happens at nap time pretty much every afternoon, but let’s just say, per usual, she screamed for the two hours that should be nap and never actually slept.

About once a month, this adorable little habit of hers makes me break down into a psychotic puddle in need of wine and Xanax (both of which are “frowned upon” when with child…). Monday was one of those days. I had seriously had it. Again.

So, I pulled her out of her crib after two hours of screaming; she laughed at me, and I accepted the fact that she, again, had won.

Let’s get out of the house now. I had to get out of the house. So, I decided to go to a specialty grocery store to get the coffee flavoring I needed. I was in a total haze while driving. I was cursing people who told me that this would pass and I would miss this (it hasn’t yet – 18 months, people, and I won’t). I kept asking God why children had to be so difficult. I asked Him for just a little break. Just send me a little sunshine, God.

Woop Woop. Red and blue lights behind me. Promptly followed by the biggest, hysterical sob fest that I couldn’t even pretend to hide from the officer. If I had had it together enough that day to have mascara on, it would have ran like Niagara down my face. Poor dude felt so bad for me as I rambled and gasped about difficult children, being pregnant, husband away on business, just need to get out of the house. He let me off with a warning and ran back to his car quicker than he should have.

I got my coffee yums, threw in some scones, and headed back home. Ellen screamed the entire way because I wouldn’t let her watch tv. Um? I drive a Saturn Ion, kid. And, of course, as we turned down our street, she passed right the right out – it was 5pm. Greeeeat.

My plan was to wake her in a half hour, but I didn’t need to. She woke screaming, per usual. Good morning, sunshine.

Then we inhaled a nutritious dinner of vanilla lattes, blueberry scones, Goldfish and raisins. Ain’t nobody cooking that night.

So, why am I telling you this? What did I learn?

Honestly, I didn’t learn a stupid thing. Being a mom is hard. It’s not you. It’s them….it’s them!