You are here: Home / Link Up / What I Wore Sunday / Was ich trug am Sonntag – und bienen

Yeah. I used an Internet translator. I’m not that romantic.

After Mass today, we had to pick up beer – it’s what Catholics do. So, naturally, we decided to stop in the ghetto at a liquor store. Heck, we played it fast and loose with a no nap baby in the pews; certainly we could handle a little shady offie.

So, I slipped into my authentic German drindl, and – wait, I didn’t mention that part earlier? Oh yes. Right. We were going to a German fest and authentic clothing was encouraged. When I saw that a lady in our town was selling her 1967 drindl, HOW COULD I NOT BUY IT? Obviously.

So, I slipped on my dridl after Mass, and we pulled into the liquor store where Mike left us in the car with the windows cracked like the dogs we are. He took the keys too because I don’t want someone to get us.

Then, this jerk bee comes along. First I see its shadow creeping up on us all Jurassic Park. Then, it tries to car-jack us – just thinks it can come in my window. So, I go to roll the windows up, but Mike has the keys (so no one gets us, remember?). The only logical thing to do is to start using my phone as a shield and violently jiggling it between the window and top of the door. But this bee would not.take.a.hint.

So, in order to SAVE MY FAMILY, I had to jump out of the car – which set off the car alarm. Mike ran out to see what kind of crazy his wife was committing, but he only stumbled upon heroism: me in all my German dridl glory running around a ghetto liquor store parking lot swatting my iphone at a bee while yelling at it to “leave us alone!”

He hung his head and shamefully walked back into the store while the clerk laughed at him. Chumps. 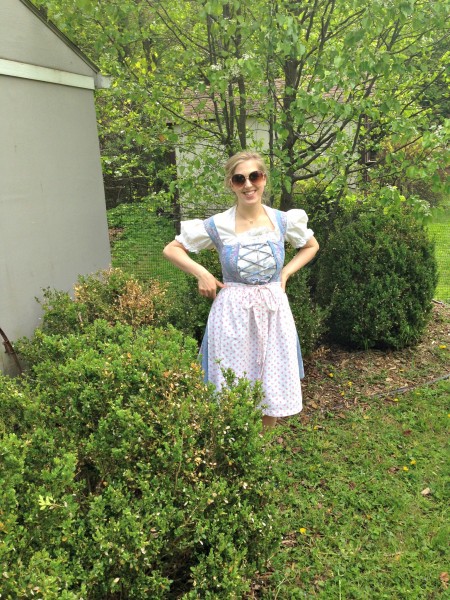 peeking out from my home amidst the hills full of edelweiss 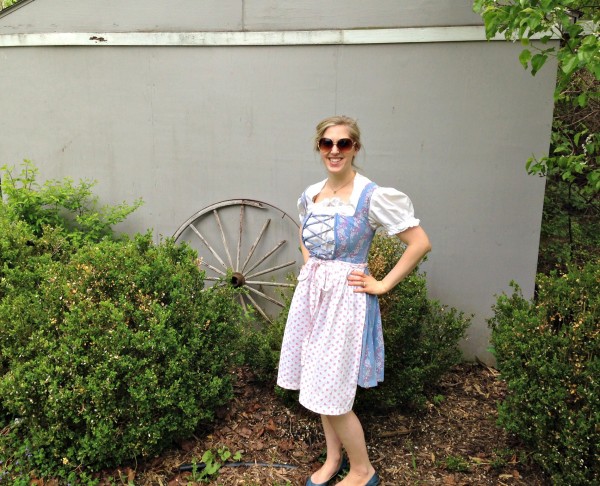 Mike is wondering when I am going to sell it. But, I have so many other places I need to wear this to.

« 7QT: It does not include heavy amounts of mental or physical exertion.
Simple Construction Birthday Checklist »