You are here: Home / Anna / That Fat Shadow Man-Jerk

A couple of weeks back (#4), I told you I was bringing a friend on board to Call Her Happy. Welp, she’s here! Friends, this is Anna. Anna, this is friends. Anna will be delighting you with her writing ways on a monthly-ish basis. She’s a Catholic wife and momma of two. But, I’ll tell you all about her soon. For now, enjoy her first post. That’s an order. 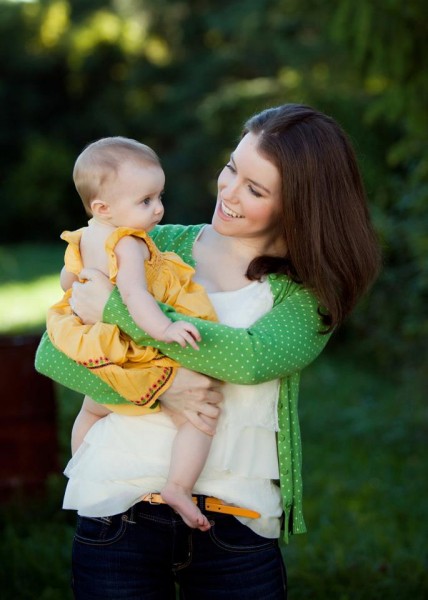 How can you tell if a woman is a mother?

Is it the noble and wizened glint in her eye?  Her dry, cracked knuckles parched from their endless daily washings?  Or is it her gait, determined, fatigued, purposeful?

No.  Look down.  Look down on the ground at what should be her shadow.  But instead of a shadow of her own frame, see the silhouette of the fat man pointing and laughing at her, his gluttonous belly bouncing with greasy-used-car-salesman glee?  Yes, that’s how you can tell she’s a mother.  That fat shadow man-jerk following her around is Murphy.  Of Murphy’s Law.

You get what I’m saying now, don’t you.

I got acquainted with Muphy right at the beginning of my life as a mom.  My dainty, sweet little newborn daughter would not spit up all the often.  But when she did, it was everything in her stomach. In public. Directly down the shirt.   And the one night my husband and I were able to get away before our second was born?  Our hotel smelled like a dead parrot and there were banshee children running and jumping around at 2 am in the room directly above us.  We came back more sleep deprived than if we had just stayed home, in the most un-sexy sense possible.

Murphy, I’ve found, is especially attentive to us when we go to Mass, probably because it involves the highest potential of public embarrassment.  A huge amount of people around us in an environment that’s meant to be quiet and reverent?  Perfect. My son deals with the nursing drape alright most of the time.  But at Mass?  How about I stick a wild turkey under my shirt and nurse that.  It doesn’t help that I’m so fair that one slip of the nursing drape and the clergy will think lightning has flashed across St. Mary side of the sanctuary.  My daughter will not be thirsty at any mass, ever, although I bring her sippy cup with us every time.  The ONE time I forget, clearly she had taken some mysterious trek through the sahara on the way to church and therefore was beyond parched by the Gloria.  My husband had to usher her to the dreaded petri dish of the drinking fountain to go get some water and a stomach virus.  And the loudest poops that ever thunder out of the newborn?  Only during the consecration, baby, and the parishioners sitting around us aren’t going to be the types that will high five us as we carry him out to the restroom.

One last thing, Murphy also loves his Kanye moments.  The baby will have an awful blowout at the mall.  I go in, the bathroom is clean and blessedly empty. “Oh, I’m so glad we’ll be able to change you in here!” I say to the baby.  “Let’s put you down on the changing stat—” “Imma let you finish,” says Murphy, “But the stall with the changing station in it actually has a store employee in it.  And she’s taking the longest poop of all time.  OF ALL TIME!”

On the one hand, Murphy trains us to be humble and prepared.  To anticipate all the potential mishaps and to leave the rest to God’s love and mercy.  We grow in virtue as we’re faced with these little daily challenges, and although it’s a pain in the ol’ behind, it is good.  On the other hand, he’s a relentless thorn and I hate him.

As I continue in my vocation, I try to learn from these situations where everything that could go wrong, did. To count everything as a chance to suffer for Christ, to gain character, to grow.  Therefore, half my car is a stockpile of plastic bags. I am Mother Boogey Wipe.  I carry an airline-sized snack array and a fully loaded changing station in the back seat.  But you know, the day I leave the house ready truly for anything will also be the day I forget to load the baby into the car.

« Vlog Nasty
7QT: kinda looks like a nightgown on me »