You are here: Home / Archives for The Children

Song for a Fifth Child

Mother, oh Mother, come shake out your cloth
empty the dustpan, poison the moth,
hang out the washing and butter the bread,
sew on a button and make up a bed.
Where is the mother whose house is so shocking?
She’s up in the nursery, blissfully rocking.

Oh, I’ve grown shiftless as Little Boy Blue
(lullaby, rockaby, lullaby loo).
Dishes are waiting and bills are past due
(pat-a-cake, darling, and peek, peekaboo).
The shopping’s not done and there’s nothing for stew
and out in the yard there’s a hullabaloo
but I’m playing Kanga and this is my Roo.
Look! Aren’t her eyes the most wonderful hue?
(lullaby, rockaby, lullaby loo).

The cleaning and scrubbing will wait till tomorrow,
for children grow up, as I’ve learned to my sorrow.
So quiet down, cobwebs. Dust go to sleep.
I’m rocking my baby and babies don’t keep.

For those of you not already in the loop, my eviction notice worked wonders! I went into labor that night. So, here are the numbers:

22 hour labor
Born at 7:34pm
July 22, 2011
6lbs 15 oz
19 1/2 in long
Infinite love.
You’ll have to pardon me if my posts aren’t as frequent the next few weeks, but I promise to put up as many updates as possible (including all of the non-gory labor details!).
For now, a big shout out and thank you to Vicki, our doula. You gave us the confidence we needed to have a wonderful birth. To my hubby. You are the most amazing father and care-taker a woman could ever pray for. To Mima. Thank you for being a wonderful maid and babysitter while I get some much needed Zzzzzzz! And to everyone else for all of your prayers and support.

Now, the pictures of our beautiful squeaky monkey!

Ah. Life is good. Thanks be to God.

Pursuant to the provisions  of your mother, you are hereby given an eviction notice and notice to vacate, on or before July 23, 2011, the uterus owned by your mother of the State of Michigan, whose womb is now occupied by you.

The reason for this eviction notice is:
Your neglect to recognize the recent heat wave sweeping our state and your mother’s inability to do anything but sit inside and watch the WKAR Create station on PBS (why don’t we have cable, again?)

You are hereby notified that your right to avoid this eviction by payment, prior to the expiration of this notice has been revoked. Resistance is futile.

I hereby certify that on the twenty-first day of July 2011, at 5:15 pm I left at the womb of Ellen Margherita above named, a true copy of the above original notice.

Now that we know we are having a girl, my thoughts on motherhood are more specifically tailored to how raising a girl is different than just raising a kid. I found this article online, and it really aligned with how I feel about today’s culture. I thought I would pass it along to all of you moms and dads of little girls. To each her own, I say. But this article really summed up and affirmed what I believe.
My prayer for you, Ellen Margherita, is that you are able to be childish in your childhood and childlike as an adult. I pray that you have the wherewithal and fortitude to love God and yourself. And I pray that your actions always align with these prayers. I don’t pray for just happiness because I hope these other things will create happiness for you.
So, here is the article.

p.s. A few minutes after posting this, a friend found this one too. Just more to think about.

Today was the big day! We finally found out Tiny’s gender! I warned Tiny before we went in, “This is the only time you will ever hear me say this but, ‘keep your legs open!'” Tiny cooperated and we are pleased to announce that we are having a very healthy baby…

I know, I can’t believe it either! I was 100% convinced that this little baby was a boy! So much for mother’s intuition. I guess that kicks in AFTER the baby is born! I let Mike have his “I told you so” moment, and now I know he will never believe me again for any subsequent children…I wouldn’t either! Anyhow, let’s get past that boy stuff because girl stuff is SO MUCH cuter anyway! Here are some pictures of our daughter: 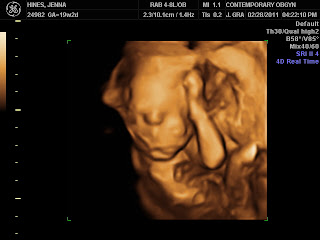 The entire time we took pictures, she kept putting her hands to her forehead. She is either so very tired or a little drama queen! 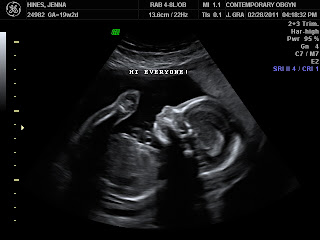 Here is a side view. Look at that brain…we have a smarty on our hands! But, she’s a Mike/Jenna creation, so we already knew that! She’s got her knees pulled up, so she is in the fetal position. So cliche, Tiny! 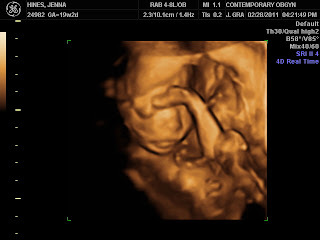 Here is another picture with her hands to her forehead. Call my crazy, but I think she looks like me a little! Look at her nose and mouth! She is BEAUTIFUL! And yes, I realize that sounds a bit conceited right after I told you she looks like me…she is way better looking though :)

Mike and I decided on a name as well, but we are starting to second guess our choice. I wish they just came with name tags…I mean, God knows her name already, but I think He is holding out on us! “Before I formed you in the womb I knew you,” right? Help a girl out! To remedy this roadblock, Mike and I have decided to call Tiny by her name for a week or so just to make sure, then we will go public. There is always some kind of hangup we have about each name, but tonight, my mom told me, “the older you get, the more you realize this: name your baby whatever you want. You’re her parents.” And, I know she is right.

So, for now, remember to pray for Tiny, and soon we will give you something else to call her by. We will continue to pray about her name and for her future. But tonight, we are just saying prayers of thanks for a Happy, Healthy, Holy baby!

17 weeks and one day today! Tiny is about the size of my hand, and my pants are officially unbuttoned all the way. Mike is on a crusade to convince me to buy new pants. Usually this would be a dream come true…and although I know gaining weight is good for Tiny, I’m just not ready to pack away the skinny jeans. Maybe next month.
Second trimester has been everything I hoped for. I no longer sleep 14+ hours per day and morning sickness is non-existent. I have, however, picked up some other wonderful side effects. The best so far is extreme clumsiness. I did not know it was possible to drop your keys or knock over an entire table’s contents so many times in one day. I run into walls and fall over while doing nothing more than just standing there. It is truly comical, and I would trade first trimester for second ANY day of the week! But, the best part of second trimester is quickening. Last week, I started to feel butterflies in my stomach, and yes, that is Tiny moving around! I don’t feel it everyday, but most mornings I lay in bed begging him (or her) to do it again. It is so cool, and it makes me smile every time :) Mike hasn’t been able to feel it from the outside yet, but I’m sure as the next few weeks progress, he will be able to.
As a tease, Mike and I have picked out names for our little one, but you won’t find out until we know the gender! That day is fast approaching, and as long as Tiny isn’t feeling particularly modest, we should find out on March 15th. As a reward for your patience, here is a baby belly picture for you! We took this today, so I am approx. 17 weeks here: 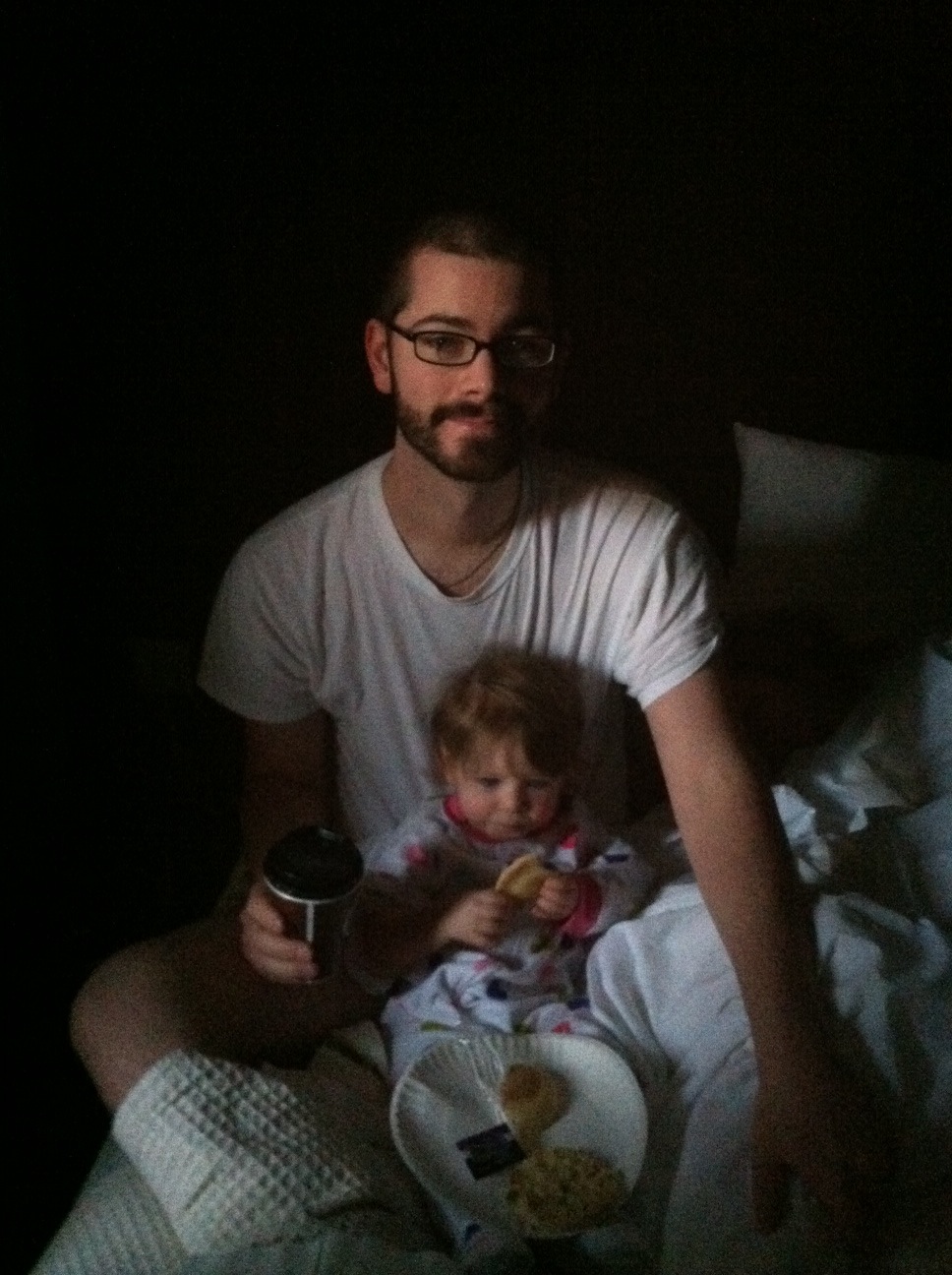 Finally, in an effort to get ready for Tiny, we have started researching various baby products. You have probably seen all of my questions posted online. Being pregnant in a Facebook age is priceless. Thank you for all of your advice! Keep it coming, and I will keep the updates coming. We have our next OB appointment tomorrow, then one short month until I prove that I am right and he is a boy, or Mike gets to say “I told you so” and she is a girl. We can’t wait! 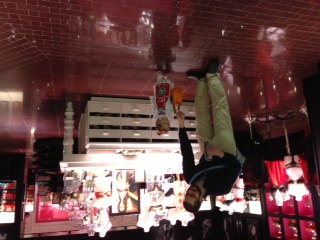 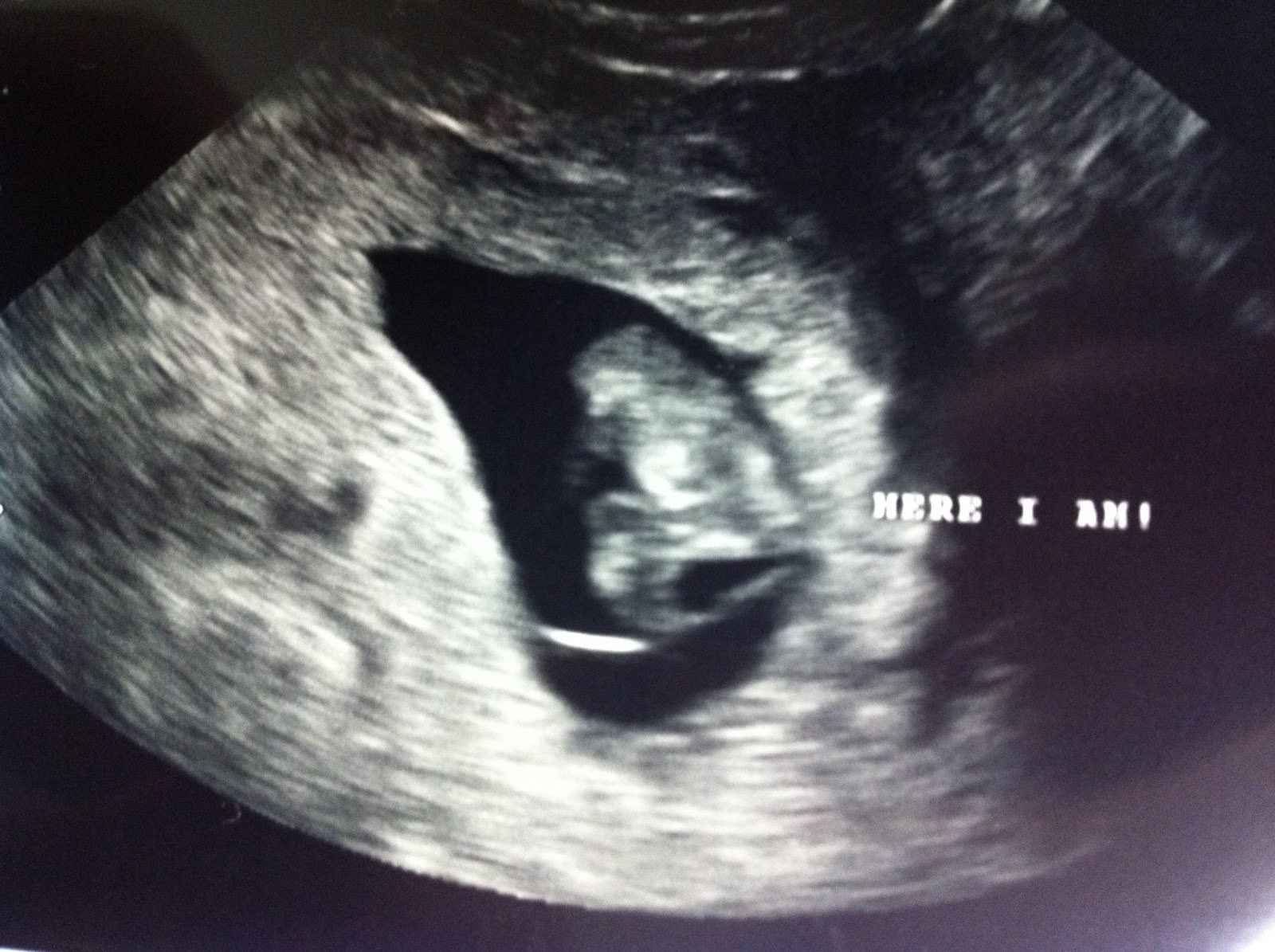 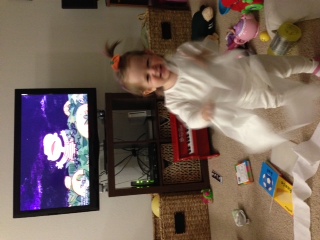 I’m upside down in these pictures! Silly, just like my daddy!
Oh, final random thought/question: I had a dream last night that a friend was having a baby. Turns out she actually did last night — a baby girl! Congrats Tiffany and Derek! Do you get some kind of super preggy-sense when you are pregnant?
Follow