You are here: Home / You Know? / Awkward Mom Moments
I never knew how awkward being a mom could really be.
There are so many situations where I feel like I need to do something but I don’t know if I should, no I shouldn’t, wait, I’m the adult here, but it’s really none of my business, o my word getmeoutofhere.
For instance, I was at the park with Ellen on Sunday. There were only two other boys there, and they were about 7 or 8. No other parents. No other kids. Just me, Ellen and the two boys. 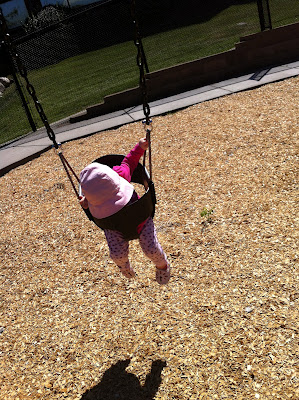 Awkward Swinging.
So, we’re playing, we’re exploring, we find the sewer more fascinating than anything else there, when another 7ish-year-old boy shows up. Let’s call him Richard because, well, that’s what he said his name was.
Richard asked the other two boys if he could play. And, heartbreak, the two boys said no and that he was weird and they didn’t want to play with him.
Oh. My. Was my heart ever broken. Richard just stood there awkwardly. I just stood there awkwardly because Ellen wanted to be right in the middle of their awkward awkwardness.
So, I’m standing there thinking, “I should say something. That was mean. But they aren’t my kids. But I want to stick up for this boy. But that might make them make fun of him more. Where are these kids’ parents anyway? Richard, say something snarky so you look cool. Come on! Aw, do I need to say something?”
Then, Richard’s dad called him for dinner, and he walked away slowly looking so defeated.
I was probably just as crushed as he was.
What would you have done? Do you have any other awkward parenting situations to gripe about? Am I the only one who struggles with this?

Yeesh. It gives me the willies.