My husband and I entered the Catholic Church Easter vigil 1999. Thanks be to God! Among the many blessings of our Catholic faith is the knowledge that we don’t have to figure it all out ourselves. We are not on our own. We have the sacraments, the communion of the Saints, and the Magisterium to guide us. But even though we aren’t on our own, in the spiritual and universal sense, I do sometimes feel a bit alone in the cultural sense.

We live in a small, rural town in Arkansas – smack in the middle of the Bible Belt. Growing up here, I knew two Catholics. Two. There are more Catholics here now, but my children are still very much in the minority among their peers.

To make things more challenging, neither my husband nor I were raised Catholic, so we don’t have much experience with Catholic customs and traditions. Fortunately, since our conversion, my mother and my brother, Michael, and his family (and our former pastor and his wife) have converted to Catholicism. So we do have Catholic family. But Michael lives 500 miles away. They live in Maryland, and he works for the John Paul II Institute for Faith and Family. His kids go to Catholic school. All their friends are Catholic. They are immersed in Catholic culture. I’m not going to lie. I’m jealous. Happy for them, but jealous.

All of this is to say, that it has been a struggle raising our children Catholic – not in terms of the Faith, we love the faith, but in terms of giving them a truly Catholic experience. I try, but it’s not how I was raised, and there is little support or fellowship where we live, so I feel like I’m just skimming the surface of what Catholic life could be. Sometimes, I feel like we don’t even have our toes in the water. Here are just a few of my Catholic Mom Fails.

Since our conversion, I have fantasized about raising really Catholic kids. I’ve dreamed of elaborate name day celebrations and nightly family rosaries complete with candle lighting. I’ve imagined volunteering at their Catholic school where their teachers, Sister Mary Ignatius and Sister Mary Augustine would lead them in the Angelus each day at lunch. I’ve longed to name a baby Benedict.

As it is, I would just be happy if they each knew which Saint they were named for. We pray a morning offering in the car on our way to public school. I keep icons and holy images around the house to remind them that we are really Catholic. I try to use Catholic expressions like “Offer it up!”   And while I don’t do name day feasts, I do make Confess Your Sin-amon Rolls for a treat after the kids have been to reconciliation.

Still, sometimes I worry that our home and our lives don’t look much different from those of their Protestant friends. Then I overhear when one of their friends asks if we worship Mary or believe in the Bible. And my kids know the answer! I laugh when my daughter tells me how many people favorited her Confess Your Sin-amon Rolls tweet. I watch them kneel and make the sign of the cross and recite the creed at mass, and I know that the beauty of their faith is sinking in little by little.

Bottom line, we are doing the best we can to raise Catholic children in very Protestant soil. But my children are really Catholic. Imperfectly, beautifully, completely Catholic. May the Saints preserve us! 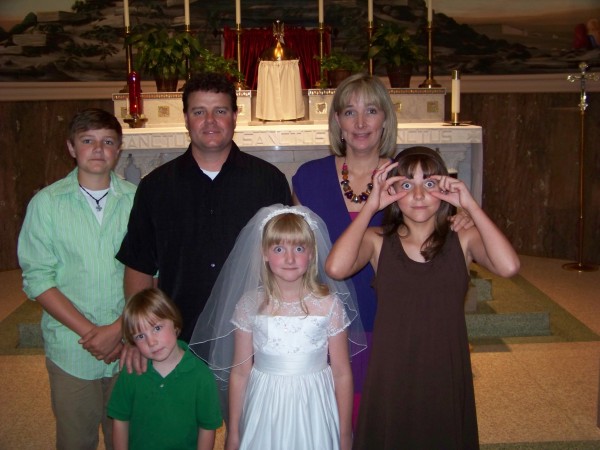 A Little About Laura from Charming Farming:
My husband and I live on a farm in the Ozark Hills of Arkansas. We have four kids, three dogs, twenty chickens, eight ducks, and a herd of buffalo. I teach high school speech and drama, and I love it, but my dream job would be full-time writing and farming. My other dream is to be able to get a good latte without having to drive an hour. I blog at charmingfarming.com and youngcatholicsdaily.com.